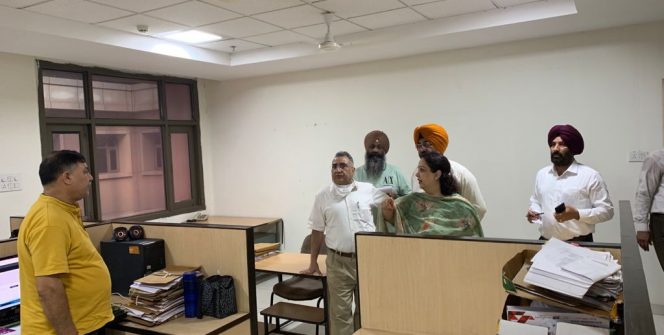 Giving details, an official spokesperson of the Punjab Government said that during the checking few officers and employees of concerned offices were found absent/late from duty. Taking a serious note of this, Mr. Vijay Kumar Janjua issued verbal directions to all officers/officials to ensure punctuality in their offices in the future and seek an explanation from all absentees. Directions are also given to all officers /officials to be present in the office on time in the future.

He also directed all three directors to conduct routine surprise checking at field level offices also through making a team of joint directors and deputy directors.

Further, he also directed all three departments to digitalize the office record and to send the official files through the e-office in the future.

PSLSA covered around 13000 villages, towns and cities of Punjab twice to sensitize people about legal services

ON CM’S DIRECTIVES, PSPCL CLEARS OUTSTANDING ARREARS OF ELECTRICITY BILLS WORTH RS.77.37 CRORE OF 96,911 DOMESTIC CONSUMERS SO FAR HAVING LOAD BELOW 2 KW