Punjab government fails to manage health services and save lives in the state: AAP 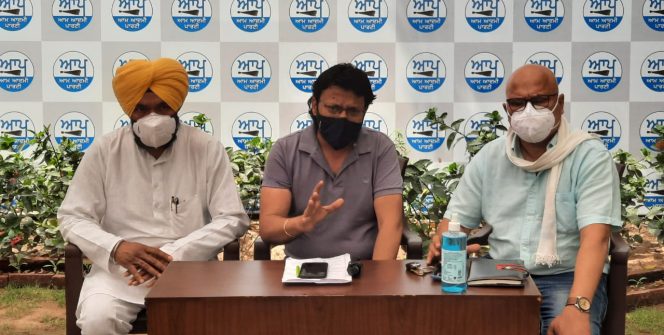 Chandigarh, May 4 – The doctor wing of the Aam Aadmi Party (AAP) Punjab alleged that the Punjab government had failed to provide health services and save lives in the state during the Covid-19 pandemic. Addressing the media during a press conference convened here on Tuesday, party’s doctor wing state president Dr Ravjot, state co-president Dr Sanjeev Sharma and vice president Dr Charanjit Singh Channi said that the new strain of Covid virus was spreading rapidly in the entire country including Punjab, which was also affecting the youth; but neither the Prime Minister Narendra Modi-led centre government nor Captain Amarinder Singh’s government in Punjab had made proper arrangements for the treatment of Covid victims.

Dr Ravjot said that most of the district hospitals in Punjab did not even have ventilator systems for the treatment of critically ill patients. “Even in Punjab Health and Family Welfare Minister Balbir Singh Sidhu’s own district SAS Nagar, there is no ventilator system in any of the government hospitals,” he added. He further said that while there was a severe shortage of medicines and oxygen across the state, about 300 ventilators provided by the central government to Punjab were gathering dust in the hospitals as there were no employees to run them. Dr Ravjot said that the Captain government had not recruited doctors, medical staff and nurses in the state despite the warning of Covid pandemic and had not provided ventilator systems in the hospitals.

He further alleged that the mortality rate of Covid victims in Punjab was 2.4 per cent, which was much higher than the average death rate of the entire country. Dr Sanjeev Sharma said that the pace of vaccination against Covid in Punjab was very slow. He said that about 35 lakh people in the state had been vaccinated so far and the Captain government had completely failed in the management of medicines. Dr Charanjit Singh Channi said that Captain Amarinder Singh had handed over many government ventilators to the private hospitals and the private hospitals were charging Rs 8 to 10 lakhs from the Covid patient for treatment; which was intolerable for a common man. He further said that Captain Amarinder Singh had ruined government departments as he was the supporter of ‘mafia rule’. The AAP leaders appealed to the Punjab and Union government to provide free vaccination to the people to protect them from the Covid pandemic and to declare it as a national immunisation drive.