PSLSA covered around 13000 villages, towns and cities of Punjab twice to sensitize people about legal services 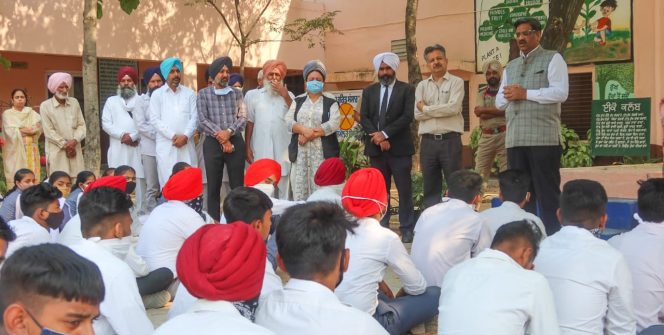 Later, on the instructions of the Executive Chairman, both the judicial officers visited the villages Dharamgarh and Bakarpur. They interacted with the villagers and the students and informed them about the remedy of Free Legal Aid by participating in the Legal Awareness Programmes.

They informed that the State Legal Services Authority has so far covered approximately 13000 villages, towns and cities of all the 23 districts of the State twice to educate the population about the Free Legal Aid, remedies against domestic abuse, access to justice and legal remedies etc.

It was also told that under Section-12 of Legal Services Authorities Act, 1987, a woman, child, any person in custody, specially-abled persons, SC/ST and any person having annual income of Rs.3.00 lacs can avail the benefit of an advocate to be paid by the Authority. The services can be availed for cases in all Courts, Commissions and Tribunals. Anyone can contact the authority through its Toll Free Number 1968.

Notably, in commemoration of 75th year of Independence and 25th year of Legal Aid Movement, a Nationwide Campaign “PAN India Awareness and Outreach Programme- Azadi Ka Amrit Mahotsav-2nd October to 14th November, 2021” has been launched by the National Legal Services Authority, New Delhi. Under the visionary leadership of Hon’ble Mr. Justice Ajay Tewari, Executive Chairman, Punjab State Legal Services Authority, the Mass Awareness Drive has been launched throughout the State of Punjab. The endeavour is to reach out to all the villages, towns and cities of the State thrice, in addition to door to door campaigning so that the footprints of the existence of legal services could be left in each village, town and city.

Under this National level campaign, the masses are to be made aware about the concept of Free Legal Aid, procedure for availing different legal services, empowerment of women including remedies against domestic abuse, various welfare schemes, policies of government including Victim Compensation Schemes, access to justice and legal remedies, procedure for filing complaints in police station, rights of person during arrest and detention, rights and entitlements of persons with disability, senior citizens, transgenders, SC/STs and other marginalized groups, rights of children including procedure for filing cases under POCSO, sensitization of stakeholders under the criminal justice administration with regard to the right of legal assistance and functioning of legal services Authorities and Alternative Dispute Redressal (ADR) Mechanism as well as the process to avail the same.