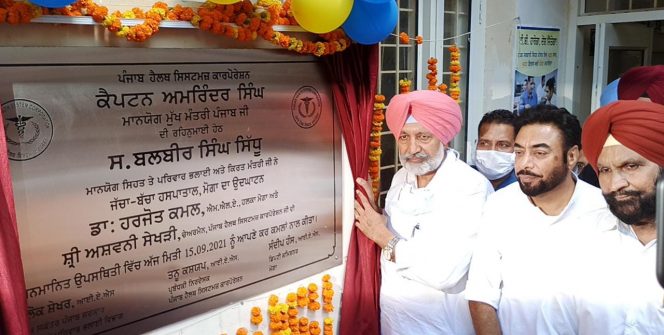 Speaking on the occasion, Mr. Sidhu said that Mai Daulatan Maternity and Child Hospital with a capacity of 50 beds have been constructed for Rs. 5.48 crore and is equipped with all kinds of facilities.  29 such hospitals have been completed across the state while construction work of 8 hospitals is in progress.  7 more hospitals will also be commissioned this year.

Mr. Sidhu said that besides MCHs, Health Wellness Centers were being set up to provide quality healthcare facilities to the people especially those who are living in rural areas of the state.  He said that after witnessing the successful functioning of HWCs, the number of these centres will be increased to 3,000 which will be made functional before March 31, 2022.

Sharing the details regarding recruitment made in the Health Department, he said that Captain Amarinder Singh led Punjab Government has made recruitment of more than 13000 medical and paramedical staff during 4.5 years.  However, the recruitment of specialist doctors and health workers is still ongoing.  600 more doctors are being recruited soon to further strengthen all Government Hospitals.

Health Minister stated that the Health model of Delhi Government has proved failed during the pandemic. 5500 corona patients from other states were treated in Punjab, out of which 80 per cent were from Delhi who didn’t get treatment services in the national capital.  He claimed that no state including Delhi could imitate Punjab in terms of public facilities.

He also lauded the duty performed by government doctors and other staff during the pandemic. He further said that AYUSH Hospital at Moga would be commissioned in the next two months.