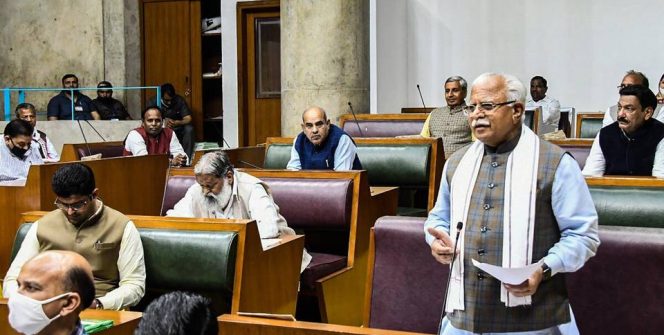 The no-confidence motion moved by the Congress against the Bharatiya Janata Party-Jannayak Janta Party coalition government in Haryana on Wednesday was defeated by 55 votes to 32. The legislators voted along party lines with two Independents — Meham MLA Balraj Kundu and Dadri MLA Sombir Sangwan — supporting the vote of no-confidence.

In the 90-member assembly, the BJP and JJP have 40 and 10 MLAs respectively, besides the support of five Independents. Lone Haryana Janhit Party MLA Gopal Kanda, representing Sirsa, also voted in favour of the government. The Congress has 30 MLAs. Two Assembly seats of Ellenabad and Kalka had fallen vacant earlier this year.

Moving the no-confidence motion against the Manohar Lal Khattar-led government, Leader of the Opposition Bhupinder Singh Hooda said the coalition government had completely lost the confidence of the people and its representatives could not even go to their own constituencies and the villages. He accused the government of snapping the power connection of the farmers agitating at the Delhi border and denying them access to toilets.

Mr Hooda said both parties in government had promised Minimum Support Price to farmers in their manifestos, but forgot about it after coming to power. He also raised issue of unemployment, deteriorating law and order situation and increasing cases of drug abuse in the State.

Mr. Hooda, however, said he won’t talk about the three farm laws since they were outside the ambit of the Assembly and already stayed by the Supreme Court.

Mr. Khattar, in his reply, said the Congress party had the culture of “lack of confidence”. He took a dig at factionalism in the opposition party saying that they did not trust even their own leaders. The Chief Minister reiterated that the three farm laws were “optional” and the MSP and the mandi system would continue. Mr. Lal said an estimated ₹8,000 crore loss was caused to the industry and the State exchequer due to the ongoing farmers agitation till February 9.

Accusing the Opposition of playing politics and provoking the farmers, Mr. Lal said he favoured the resumption of dialogue and an early resolution to the farmers agitation.