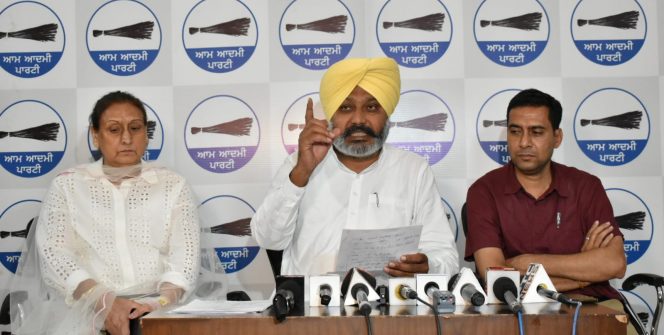 Chandigarh, September 17 – The Aam Aadmi Party (AAP) Punjab has claimed with statistics and facts that like the previous Badal government, the ruling Congress government had completely wiped out the government health system under a well thought out conspiracy. The worst punishment for this is being meted out to the rural population of the state as government health services in rural and remote areas have come to a complete standstill.

Addressing a press conference at the party headquarters here on Friday, senior leader of the AAP and Leader of Opposition (LoP) Harpal Singh Cheema said that till 1980, Punjab’s public health service was number one in the country and above national standards. “Unfortunately, today Punjab is lagging behind Bihar in many aspects. The Congress-Captain and the Badals-BJP are directly responsible for this plight, which has deliberately destroyed the best government service system to promote the private health mafia,” he said.

He said the decision of the then Captain government in 2006 to hand over 1,186 rural dispensaries under the Department of Rural Development and Panchayat has cost the rural population of Punjab dearly. He said keeping this fatal decision of the Captain government the same; the Badal-BJP government during its rule from 2007 to 2017 did not hand over the rural dispensaries to the Health Department; due to which corruption is at its peak.

The AAP demanded that rural dispensaries be handed over to the health department immediately, failing which the Aam Aadmi Party would wage a struggle for the interest of the common people. Cheema said the present government was pretending to fill the posts of specialist doctors, but does not want to fill them. He said no specialist doctor is applying in the issued advertisement due to meager salary, as the fee for becoming a specialist doctor goes into crores of rupees. He asked why the notification issued in 1989 for creating a separate cadre of specialist doctors was not implemented till date.

“There are 3,000 sanctioned posts of indoor nurses in about 125 government hospitals across Punjab, out of which 1,000 are vacant; while 1,600 out of 3,000 posts of pharmacists are vacant and out of total 2,800 posts of male workers, about 2,150 posts are vacant. The same situation is with the sanitation and other staff,” said Cheema. He said only the number of MPW women workers posted in the field is satisfactory with 4,500; who are posted at 2,900 sub-centres.

The LoP further said that in 1980, there was one rural dispensary for the population of every 10,000 people, but today the ratio has reached the population of 15,000. In 1,186 rural dispensaries, one post each of pharmacists and class four employees are sanctioned. Of these, one-third (400) posts of doctors are lying vacant; whereas pharmacists are less than 50 percent. Cheema said the general OPD services are completely down and even simple medicines are not available.

Cheema said instead of 412 Primary Health Centers (PHCs), the number should be 700 today, in which there should be 2 doctors, 4 nurses, peons, sanitation workers and other staff; as these centers have to provide services 24 hours, seven days a week. “Today not a single PHC in Punjab is providing 24 hours service. The state’s PHCs are providing services on paper with only 30 percent staff. These are only reference centers that too during the day,” he added.

Similarly, there are only 44 tehsil level hospitals, which have acute shortage of medicines and other equipment besides 20 percent doctors. With the current number of tehsils, there should be 90 hospitals and each hospital should have at least 50 beds. Cheema alleged that the government itself is financially exploiting about 25,000 Asha workers providing services across the state and giving them honorarium for unskilled work (Rs 10,605 monthly) which is a shame. He claimed after the formation of the AAP government in 2022, services will be provided in Punjab on the lines of the Kejriwal government.