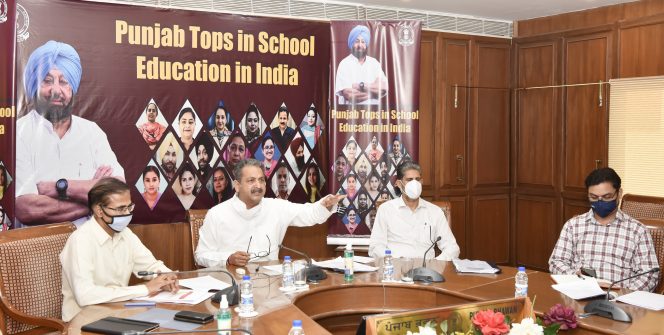 Chandigarh, June 10 – Punjab school education minister Mr. Vijay Inder Singla, on Thursday, lashed out at Kejriwal government riding the latest edition of the Performance Grading Index (PGI) recently released by the Union HRD Ministry and said that the Delhi Government should learn from Punjab to efficiently implement the school education. The cabinet minister said that the Kejriwal government has wasted the taxpayers’ money on advertising campaigns instead of investing the capital in the infrastructural development of schools. The cabinet minister was here at Punjab Bhawan to virtually attend the program of Chief Minister Captain Amarinder Singh to congratulate the teachers and the entire staff of the school education department for making Punjab No. 1 state across the country in the field of school education.

Mr. Vijay Inder Singla thanked the Chief Minister for his continuous support and visionary leadership and assured that the education department would continue its efforts to improve its performance to achieve 100 percent marks next year. He added that no stone will be left unturned to retain the top-level position in the country. He added that Punjab secured cent percent points (150/150) in the domain of infrastructure and facilities which included availability of classrooms, labs, toilets, drinking water, and libraries. He said that apart from this, Punjab has also performed very well in equity (228/230) and access (79/80) domains which were comprised of inclusion of weaker sections’ children in the mainstream, appliances to the special children, enrollment ratio, retention rate, transmission rate and availability of schools.

Mr. Singla said that the Congress the government had also ensured optimum use of resources as the education department has utilized 100 percent funds in a most transparent manner by using reverse bidding process on gem portal. He added that timely and proper utilization of funds enabled the state to get the next installments in a timely manner. He said that apart from this, new initiatives and reforms have also brought brighter results to positively transform school education. He said that the smart school policy, online transfer policy, distribution of free smartphones to students, starting pre-primary classes in schools, and maintaining the level of online education during the tough times of pandemic were the key factors that helped the state to excel in the PGI.

The cabinet minister said that it was not only the PGI but other grading parameters have also shown incredible improvement in the field of school education during the tenure of the Congress government. He said that the state registered an increase of 29 percent in enrollments during the last four years and the government schools have also outshined the private schools in the results of board examinations. He added that the government schools of Punjab have recorded growth in each and every aspect of education which has become the benchmark for others.