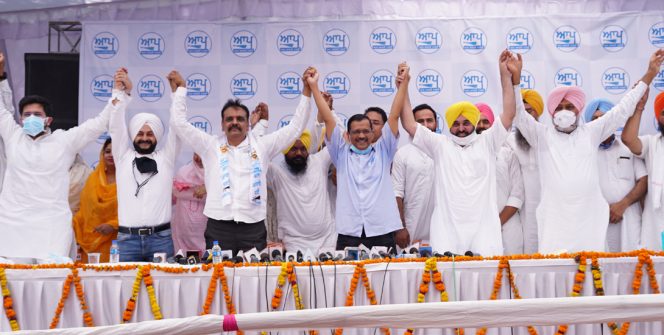 Amritsar, June 21 – In a major boost to the Aam Aadmi Party (AAP), former Inspector General (IG) of the Punjab Police, Kunwar Vijay Pratap Singh; who resigned over the sacrilege case probe joined the party in Amritsar on Monday. AAP’s National Convener and Delhi Chief Minister Arvind Kejriwal formally inducted and welcomed the former Punjab top cop during an event held here along with AAP’s Punjab state president and MP Bhagwant Mann, Punjab Affairs in-charge Jarnail Singh, co-incharge Raghav Chadha and Leader of Opposition (LoP) in the Punjab Assembly, Harpal Singh Cheema. Addressing the media on the occasion, AAP’s national convener and Delhi CM Arvind Kejriwal said that it was a happy day for the people of Punjab today, with the joining of former IG Kunwar Vijay Pratap Singh. Kejriwal said that Kunwar Vijay Pratap was not a politician; neither his parents, nor he belong to a political background. He said that the Aam Aadmi Party was not a party of the politicians, neither it has come to do politics; but only for the nation and for the welfare of the people.

Kejriwal further said that every child of Punjab knows about Kunwar Vijay Pratap Singh. “Even his opponents swear of his honesty. He has remained a dedicated cop of the common people, who struggled to get justice for the people of Punjab in the Bargari sacrilege case,” said Kejriwal. He said that the entire Punjab was watching how the masterminds of the Bargari sacrilege and the Kotkapura firing case were roaming freely. Kejriwal said that Kunwar Vijay Pratap did a thorough investigation, found out everything in the case; but the system was against him. “When he was unable to do anything while being there in the system; he resigned. It is not an easy task. He did not leave the job for himself but for the people of Punjab to get them justice,” he said. Kejriwal said that after the formation of the AAP government; the culprits of the Bargari sacrilege case would be put behind bars and justice will be given to the people of Punjab.

Further taking a dig at the ruling Congress and other parties in Punjab, the AAP’s national convener said that Punjab was going through a hard time, people were suffering due to the Covid outbreak; but the ruling Congress party was busy in internal feud for the sake of chair. Kejriwal said that there was another party in Punjab, who has charges of corruption against them and another who are not even allowed to enter a locality. He said that none of these parties care for Punjab. The people are seeing and have started saying that in Delhi, the AAP was given a chance once and now there is 24 hours free electricity. They say that the government schools in Delhi have become excellent with better facilities in hospitals and clinics in every locality, said Kejriwal. “The people say if the AAP can do it in 5 years, then what the other parties have done in 70 years,” he said, adding that the people of Punjab now want change and are saying that they also want the same facilities and services.

Kejriwal said that earlier the people did not have any option, but now they have. He said that the people of Punjab had given chances to all three parties, but nothing had changed as these parties were only after the chair, power and corruption. He appealed to the people to give chance to the Aam Aadmi Party once, assuring that position and direction would definitely change. Kejriwal also clarified that the AAP’s CM face for Punjab would be from the Sikh society, on whom Punjab will be proud.

Thanking Delhi CM Arvind Kejriwal, Kunwar Vijay Pratap Singh said that he was going to make a new start and that the land of Punjab had given him everything. The former Punjab top cop said that he resigned because after doing so much hard work, the report was given in Faridkot sessions court, but the order came from Chandigarh. On the date of hearing in the High Court, the Advocate General of Punjab went on leave, he added. “If Sri Guru Granth Sahib ji could not get justice on the land of Punjab then what would be the condition of the common man,” said Kunwar Vijay Pratap. He said that with the formation of the AAP government, common people will be able to use their power. “We will work together as a family. Whatever responsibility would be given to me, I would work diligently to strengthen the party,” he added.

Welcoming Kunwar Vijay Pratap Singh, Bhagwant Mann said that joining of such an officer, who marks honesty and hard work; is a sign of a change, which represents the common people. “People had hoped after Kunwar Vijay Pratap’s appointment as the head of SIT probing the Bargari sacrilege case, that the culprits would definitely be punished. But the system is corrupt and the ruling party is working in collusion to save the real culprits,” he said. Mann said that Punjab would be made prosperous again with justice to everyone and would be made the gateway of India. On the occasion, AAP MLAs including Deputy Leader of Opposition Saravjit Kaur Manuke, Kultar Singh Sandhwan, Gurmeet Singh Meet Hayer, Aman Arora, Principal Budhram, Jai Kishan Singh Rodi, Prof Baljinder Kaur, Rupinder Kaur Ruby, Manjeet Singh Bilaspur, Kulwant Singh Pandori, Master Baldev Singh, Amarjeet Singh Sandoa, Jagtar Singh Jagga Hissowal, former MP Prof Sadhu Singh, Youth Wing co-president Anmol Gagan Mann among other leaders were also present.