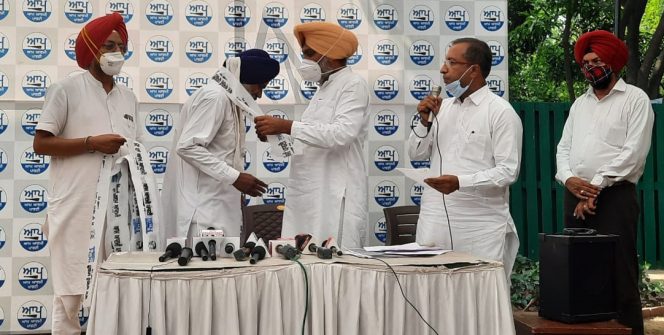 Chandigarh, June 10 – The Aam Aadmi Party’s (AAP) convoy is increasing day by day in Punjab with eminent personalities joining the party. The AAP gained strength on Thursday when hundreds of leaders of the Shiromani Shaheed Baba Bachittar Singh Dal, former Sarpanch of Mullanpur and a High Court lawyer along with several retired officials joined the party. AAP’s senior leader and Leader of Opposition (LoP) in the Punjab Assembly, Harpal Singh Cheema inducted and welcomed the leaders at the party headquarters here. Harpal Singh Cheema said that Delhi Chief Minister Arvind Kejriwal was working day and night to provide all facilities and treatment to the victims of the Covid pandemic.

Cheema said that Delhi CM Arvind Kejriwal had provided financial assistance and rations to ordinary workers including shopkeepers, taxis, and auto drivers. He said that the people of Punjab are impressed by the development works and policies of Delhi’s Arvind Kejriwal government and want the formation of the Aam Aadmi Party government in Punjab too; as they were fed up with sand mafia, liquor mafia, transport mafia and cable mafia and want to get rid of this mafia rule.